As a result of the millions of years of the evolution of the human species, the human body has established a commensal association with microbiota (microorganisms). This mutually beneficial relationship is essential for the maintenance of the health of the human host. However, it appears that when the natural barriers are disrupted, disease can result. The normal balance (homeostasis) between microbiota and host is apparently maintained by a robust immune system. The nature of this natural process, however, is poorly understood.

The current evidence is that specialized immunocompetent cells are implicated in this process. These are referred to as mucosal-associated invariant T (MAIT) cells and that these MAIT cells recognize and react to metabolites that are that are a byproduct of microbial metabolism. These metabolites are believed to play a role in microbial defense.

What makes MAIT cells distinct is the fact that in their activity they do not recognize the major histocompatibility complex (MHC) molecules like classic T cells. Instead, they are stimulated by nonpeptide (non-protein) antigens such as vitamin B2 precursor derivatives that are produced by many bacteria bound to an MHC-like protein referred to MR1.C-like H

Several recent studies point to an even broader range of activity for MAIT cells including: the control of bacterial, fungal and viral infections, a role in autoimmune disease and possible involvement in the immune processes involved in attacking the proliferation of tumor cells.

The results of extensive study of MAIT cells coming from the laboratories of Constantinides and Legoux have established that MAIT cells require a community of microbiota to enable their development in the thymus and insure their expansion into specific tissues. It seems that, in fact, newborns are rapidly colonized by a diverse complement of species and strains demonstrating the key role that these microorganisms play in establishing the healthy status of the rapidly developing new human. Furthermore, in humans, it appears that the frequency and localization of MAIT cells throughout the organism changes over a lifetime and is apparently diminished in the elderly population.

In summary, the diagram below illustrates the intimate relationship that exists between the development and function of MAIT cells and the resident commensal microbiota on barrier tissues such as the skin. These finding also emphasize the key role that these organisms play in the health of individuals beginning at birth and proceeding throughout an individual lifetime. 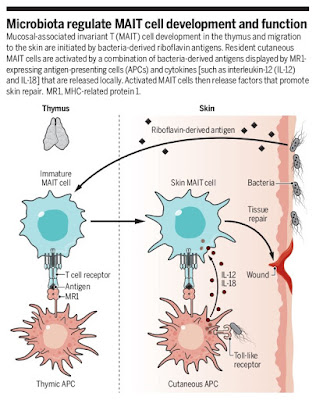 Posted by Joseph Aprile at 8:19 AM