A Very Promising Treatment for Patients with Glioblastoma

Glioblastoma is an exceedingly aggressive cancer of the brain that usually leads to death within months of its initial diagnosis. However, in clinical trials conducted by Drs Gordana Vlahovic and Matthias Gromeier at the Preston Robert Tisch Brain Tumor Center at Duke University in Durham, NC, amazing results have been achieved in patients with this disease using a human-engineered polio virus that has been stripped of its ability to cause disease. This modified virus with the ability to kill cancer cells (oncolytic) is referred to as PVS-RIPO (see illustration below). The results to-date have been so impressive, that the Federal Drug Administration (FDA) has accelerated the approval process for its use in clinical settings opening up its application to perhaps hundreds of patients who would otherwise face a grim future. 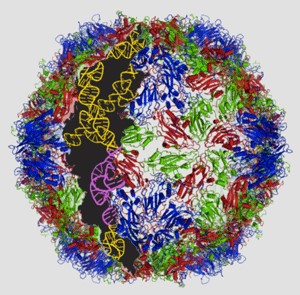 PVS-RIPO was engineered by removing the genes that are responsible for causing the neuronal damage that produces the deleterious effects of polio in humans and added in its place a portion of the genetic code of the ubiquitous cold-causing rhinovirus.


The rationale for this approach is multi-faceted. The polio virus has a natural receptor that can attach to many different forms of cancer. This receptor binds to CD155. CD155 is a cell surface glycoprotein that spans the outer cell membrane (transmembrane). It is often referred to as the Poliovirus Receptor (PVR). It has been established that CD155 plays a role in the establishment of intercellular junctions between epithelial cells. It seems that CD155 is over-expressed and abundant in various kinds of cancers including glioblastoma and pancreatic cancer.  The strategy employed was to use PVS-RIPO to preferentially infect the patient's cancerous glioblastoma cells.


In the case of the patients involved in clinical trials suffering advanced stages of glioblastoma as mentioned above, PVS-RIPO was infused directly into the tumor in order to maximize exposure to the virus. It seems that the amazing success of this treatment is due not only to successful infection with PVS-RIPO but also the subsequent mobilization of the immune system against the cancer cells.

This approach to treating advanced glioblastoma may ultimately extend to the treatment of other intractable cancers such as pancreatic cancer. This is an exceedingly exciting development that may have broad application in the treatment of and ultimate cure of cancer.
Posted by Joseph Aprile at 11:00 PM No comments: