The microbial micro-environment in the human large intestine is intricate and complex. In fact, there are many hundreds of small molecules and metabolites produced by this diverse population of microflora that may profoundly influence human health. Many of these substances are produced by enzyme-directed pathways that have been shown to be programmed by so-called, “bacterial biosynthetic gene clusters.”

One class of these molecules, colibactins, has been shown to be produced from a gene cluster called the, polyketide synthase island (PKS). PKS occurs in certain strains of Escherichia coli (E-coli) that seem to be prevalent in the microbiota of colorectal cancer (CRC) patients. Up until this time, despite many years of painstaking research, little has been discovered regarding the structure and the mode of action of colibactins.

Dr. Matthew Wilson and his colleagues at Vertex Pharmaceuticals have recently published a paper in the journal Science in which they describe the mode of action of colibactins. According to the author, “colibactin alkylates DNA in cultured cells and in vivo, forming covalent modifications known as DNA adducts. These colibactin-DNA adducts are chemical evidence of DNA damage and represent a detectable signature of exposure to colibactin. Misrepaired DNA adducts may generate mutations that contribute to colorectal tumorigenesis.”

In their research Wilson’s group identified the colibactin-DNA adducts as involving the cyclopropane ring and that the site of alkylation involves the nucleotide adenine within the DNA backbone (see diagrams below). Furthermore, it is believed that these adducts could lead to mutations in the oncogenes or tumor suppressor genes that drive CRC-related tumorigenesis. 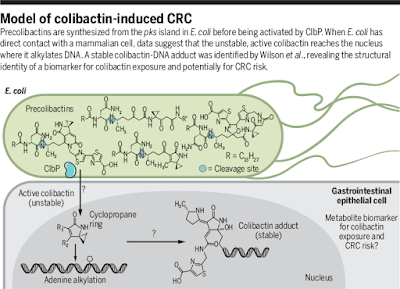 Although, this model of colibactin involvement in DNA modification is significant, many questions remain unanswered in regard to how tumorigenesis is subsequently initiated in CRC. However, it is line of research that offers some promise in elucidating cancer-causing mechanisms.
Posted by Joseph Aprile at 11:19 PM No comments: