Evolution of an Enzyme from Short Peptide Pieces

It is of great interest to understand how such complex protein structures evolved from simpler structures that are known to have been available early in the evolution of life on planet earth – amino acids and peptide. In regard to proteins, the class of molecules that represent short pieces of protein is referred to as peptides. Peptides are short strands of amino acids tied together through peptide bonds. 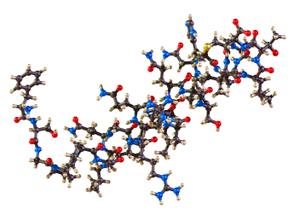 Enzymes generally require complex folding in their structures to foster their catalytic activity. Peptides are generally too short for this folding to occur. Recent research into the structure of metalloenzymes – enzymes that employ metal ions in their structures – suggest that metal ions may have helped induce folding in precursor peptides. Metalloenzymes are ubiquitous in nature and play fundamental roles in cellular biology and chemistry.

Sabine Studer from the Dana-Farber Cancer Institute, Boston and her colleagues have attempted to more fully understand the processes through which enzymes have evolved. They have done so by devising techniques for facilitating the transformation of a peptide capable of binding zinc into a functional enzyme with a complex globular structure.

According to the authors, “Recapitulating such a biogenetic scenario, we have combined design and laboratory evolution to transform a zinc-binding peptide into a globular enzyme capable of accelerating ester cleavage with exacting enantiospecificity and high catalytic efficiency (k cat/K M ∼ 10 6 M -1 s -1). The simultaneous optimization of structure and function in a naïve peptide scaffold not only illustrates a plausible enzyme evolutionary pathway from the distant past to the present but also proffers exciting future opportunities for enzyme design and engineering.”

The techniques they successfully employed to accomplish this include (see diagram below)
Computational redesign
Cassette Mutagenesis – An in-vitro technique for altering genetic structure i.e. mutations.
DNA shuffling
Random mutagenesis
Alanine scan – Alanine is one of the amino acids that plays a critical role in protein structure. 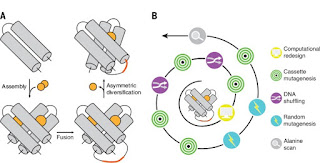 Note: that the majority of the techniques employed involve manipulating the genetic information.

The work cited above is of seminal importance in the overall search for elucidating the molecular mechanisms that may account for the evolutionary development of life on planet earth from its elemental beginnings
Posted by Joseph Aprile at 10:51 AM No comments: