In a recent article in the Science, a prestigious scientific journal published by the American Association for the Advancement of Science (AAAS), Dr. Arianna Baggiolini and her colleagues, from the Memorial Sloan Kettering Cancer Center In New York, NY, proposed a model to explain why some melanocytes preferentially transform into the cancerous state while other melanocytes do not.

Melanoma is a cancer that preferentially arises from cells of the melanocyte lineage.  Melanocytes (see image below) are responsible for   skin pigmentation through the production of melanin so that skin cells, especially keratinocytes, are protected from UV-induced DNA damage.  Melanoma typically resides in the skin.  It has been well established that a so-called “founder mutation” is required to initiate uncontrolled proliferation of cells – a phenomenon that is characteristic of all cancers.  Interestingly, these mutations, also referred to as driver mutations (oncogenes), are also found in healthy skin.  The question arises – why is it that oncogenesis preferentially arises in in some melanocytes and not others. 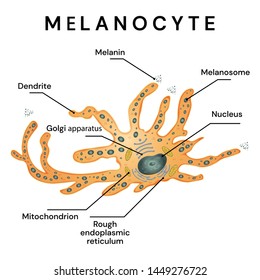 Dr. Baggliolini and her group of investigators conducted an experimental study in an attempt to explain this behavior.  The animal they chose for their studies was genetically modified zebra fish deficient for the tumor suppressor p53 to drive expression of the BRAFV600E oncoprotein in each stage of melanocyte differentiation.  The evidence they obtained led to a concept they refer to as oncogenic competence – an additional variable is present that renders the melanocytes more susceptible to transformation to tumor cells.

In regard to Melanoma, to give rise to cancer, melanocytes require a driver mutation. For melanoma, such mutations frequently occur in proteins of the mitogen-activated protein kinase (MAPK) pathway, with the BRAFV600E mutation (in which Val600 is replaced with Glu) being most prevalent.  Furthermore in normal human skin, individual melanoblasts and neural crest cells also possess this driver mutation.

Human skin contains many individual melanocytes harboring potentially oncogenic driver mutations. However, what determines which of those cells can evolve to produce melanoma has not been unambiguously determined. Baggiolini and her experimental team found that both neural crest cells and melanoblasts were capable of giving rise to melanomas but, surprisingly, that melanocytes were somewhat resistant. These findings from zebrafish were confirmed in a parallel study using human pluripotent stem cells (hPSCs) rendered deficient for the tumor suppressors retinoblastoma (RB), p53, and p16 and in which the precursor cell line was induced at various stages of melanocytic differentiation.  The results show that melanocytes, but not neural crest cells or melanoblasts, were largely incapable of forming tumors when subcutaneously transplanted into immunodeficient mice.

The result of these experimental studies has clearly shown that the additional factor required to explain why some melanocytes do go on to produce cancer while other melanocytes with the driver mutation do not, is the enzyme ATAD2.  This enzyme is responsible for chromatin reorganization.  In those melanocytes in which this enzyme is expressed at lower levels, the likelihood of transformation of melanocytes into the cancerous state is increased.

This is a very interesting finding for it establishes a link between tumorigenesis and chromatin organization.

Posted by Joseph Aprile at 12:58 PM No comments: