Ceramide belongs to a class of bio-active organic compounds referred to as sphingolipids.

This class of compounds has been shown to play important roles in many cellular processes including cell growth and proliferation, growth arrest and most importantly, apoptosis – programmed cell death.  Furthermore, research studies have strongly implicated sphingolipid signaling dysfunction in tumor progression – metastasis.  In addition, sphingolipids seem to play a role in the effect of chemotherapy and radiation upon cancer progression in patients with metastatic disease.

The current data strongly suggests that the enzyme acid ceramidase (AC) is implicated in both tumor growth and resistance to various therapeutic modalities as suggested above.  AC is an enzyme that catalyzes the breakdown of ceramide to sphingosine and fatty acid (see diagram below). 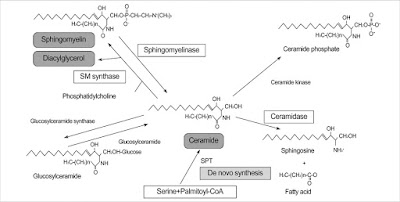 AC over expression has been found in association with certain metastatic cancers including prostate cancer.  A decrease in the intracellular levels of ceramide has been shown to result in a decrease in apoptosis that would ordinarily lead to cell death for proliferating tumor cells.

As a consequence of these data, Daniele Piomelli, the Louise Turner Arnold Chair in Neurosciences at UCI, and colleagues at the Italian Institute of Technology, have also established an association with over expression of AC and metastatic disease in melanoma patients.  This group has proceeded to successfully develop drugs that effectively inhibit AC in an attempt to restore an appropriate level of apoptosis and slow down tumor progression.

This approach is experimentally sound and has been shown to be efficacious in in-vitro experiments with cancerous cells in culture.  This
Posted by Joseph Aprile at 3:38 PM No comments:

It has long been suspected that the progenitor of life on planet earth most likely came from the sea.  It has been proposed that the possible origins of life could have been in shallow pools or under more extreme conditions such as within deep-sea vents or proximal to active volcanoes.
The current domains of life consist of bacteria –prokaryotes, the archaea -found in deep sea vents and the eukaryotes that comprise all the animal and plant life on the planet.  It has also been proposed that the archaea and the bacteria preceded the more complex eukaryotic cell type.
William F. Martin, an evolutionary biologist, from Heinrich Heine University in Düsseldorf, Germany, focused his research efforts on finding the progenitor of archaea and bacteria.  To do this, the known genetic structure of members of the archaea and bacteria domains were extensively examined.  This involved the examination of some six million genes representing thousands of microbes.
From these data, Martin and his colleagues were able to construct evolutionary family trees and were able to deduce that 355 gene families originated from single cell bacteria-like organism.  That organism is referred to as the Last Universal Common Ancestor (LUCA).  Furthermore, it is believed that LUCA lived some four billion years ago when the young earth was barely 500 million years old.
If this conclusion is correct, it clearly proposes that life began very early in the evolution of the planet earth and that the evolution of life was a much longer process than previously envisioned.

Posted by Joseph Aprile at 4:37 PM No comments: