Respiratory Syncytial Virus Infection (RSV)According to the Center for Disease Control (CDC), “Respiratory syncytial virus, or RSV (see image below), is a common respiratory virus that usually causes mild, cold-like symptoms. RSV is an RNA virus and a member of the pneumoviridae family of viruses belonging to the genus orthopneumovirus. Most people recover in a week or two, but RSV can be serious, especially for infants and older adults.”

According the National Institutes of Health (NIH), “It is one of the most commons causes of infant viral death worldwide. In fact, RSV is the most common cause of bronchiolitis (inflammation of the small airways in the lung) and pneumonia (infection of the lungs) in children younger than 1 year of age in the United States. It is also a significant cause of respiratory illness in older adults.” 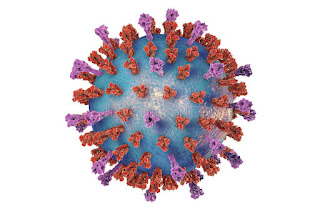 RSV infects cells of the mucosal lining of the respiratory tract resulting in the fusion of the infected cells to form a syncytium – a cytoplasmic mass containing a multiplicity of nuclei. It is a major cause of lower respiratory tract infections and hospital visits during infancy and childhood.

A further characterization of the virus is described by an article from the NIH, “The RNA of RSV contains 10 genes encoding 11 proteins. The envelope of the virus is formed by four proteins associated with the lipid bilayer: the matrix (M) protein, the small hydrophobic (SH) protein, and the two glycosylated surface proteins: the fusion (F) and the attachment glycoprotein (G). F and G proteins are crucial for virus infectivity and pathogenesis since the G protein is responsible for the attachment of the virus to respiratory epithelial cells, while the F protein determines the entry of the virus, by fusing viral and cellular membranes, as well as the subsequent insertion of the viral RNA into the host cell inducing the formation of the characteristic syncytia. Moreover, the F and G proteins stimulate the neutralizing antibody immune response by the host.

"The G protein is a type II glycoprotein synthesized as a polypeptide composed by 300 amino acids (depending on the viral strain) with a single C-terminal hydrophobic domain and a large number of glycan added [20]. Three types of epitopes have been identified in the G protein by murine monoclonal antibodies: (I) conserved epitopes, detectable in all viral strains; (II) group-specific epitopes, expressed only by to the same antigenic group and (III) strain-specific epitopes, that are present only in specific strains of the same antigenic group and expressed in the C-terminal hypervariable region of the G protein ectodomain [21].

"The F protein is a type I glycoprotein which has a structure comparable to the F proteins of other Pneumoviridae (e.g., metapneumovirus) and Paramyxoviridae (e.g., parainfluenza virus type 5) viruses. The F glycoprotein derives from an inactive precursor containing three hydrophobic peptides: (I) the N-terminal signal peptide, which mediates translocation of the nascent polypeptide into the lumen of the endoplasmic reticulum; (II) the transmembrane region near the C-terminus, which links F protein to the cell and viral membranes; and (III) the so-called fusion peptide, which inserts into the target cell membrane and determines the fusion process. The binding of prefusion F protein to the cell surface is followed by its activation and conformational changes, which leads to the fusion of the virion membrane with the host cell membrane.”

These details regarding the molecular biology of RSV is vitally important in establishing the mode of infection and suggests approaches to the development of suitable therapies and the creation of an effective vaccine. For example, a detailed understanding of the molecular structure of the attachment glycoprotein G as described above is of immense importance in regards to establishing methodologies to prevent attachment of the virus to host cells and thereby curtailing infection including the potential for the production of a vaccine for this purpose.
Posted by Joseph Aprile at 8:08 AM No comments:

As medical professionals, epidemiologists, immunologists, and molecular biologists work in the midst of the COVID-19 pandemic, many aspects of the biology of this virus are being studied and as a result, a new understanding is emerging.

As a result of these efforts some promising aspects of the immunological response have been revealed. Primary among the results of these accumulated data is the fact that individuals infected with this virus harbor T-cells – an important subset of circulating lymphocytes that play a critical role in the human immunological response – that actively target the virus and may assist in recovery. In addition, it seems that some individuals who have never been infected with COVID-19, have these cellular defenses – suggesting that this potential immunological defense arose; because they were previously infected with other coronaviruses that cause the common cold. 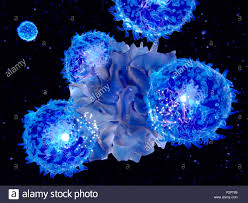 Helper T Cells
These findings provide suggestive evidence that the potent T cell responses that were shown to exist may play an important role in long-term protective immunity. In addition, a more complete understanding of how the human body responds to this particular virus will undoubtedly enhance the search for an effective prophylactic vaccine.

There are more than 100 COVID-19 vaccines in various stages of development focusing on a wide rage of modalities. Within the arsenal of the so-called “adaptive” arm of the human immune system are circulating B and T lymphocytes. The B cells are responsible for the production of antibodies against particular targets. The mechanism that the immune system employs in this regard is that the B cell produced in response to exposure to the virus is to attach itself to the viral particle and prevent it from entering healthy tissue cells. This role can be exploited in the development of a vaccine. In addition, to this part of the natural arsenal against infection, there are circulating T cells that can activate and enhance B cell response. In addition to these players, there are killer T cells that actually target and destroy tissue cells that have been infected. Given the interrelationship of these defense mechanisms, there is a correlation between the severity of the disease and the strength of the T cell responses.

Shane Crotty and Alessandro Sette – immunologists from the La Jolla Institute of Immunology – determined what proteins from the surface of COVID-19 particles were most likely to stimulate immune response and subsequently exposed cells grown in culture (in-vitro) from 10 patients who had recovered from mild cases of COVID-19 to these virally-derived protein pieces. In all the samples studied, the patients carried helper T cells that were specific for the COVID-19 spike protein – the predominant protein of the viral surface that is involved in targeting tissue cells. In addition, 70% of the patients studied showed the presence of virus-specific killer T cells. Whether these patients also acquired long term immunity is not completely clear. These data, however, are very encouraging.

Although not unambiguous, these results are of great interest and suggest that an effective vaccine against COVID-19 infection needs to stimulate the production of helper T cells.
Posted by Joseph Aprile at 8:53 AM No comments: