Use of Genetically Modified Yeast in the Production of Opiates

Opiates are pain-relieving drugs that play a vital role in palliative care.  Morphine is a well-known member of this class of compounds.  Opiates have been derived from poppy plants for thousands of years.  The compound thebaine (paramorphine or codeine methyl enol ether) - see structure below -is the natural product that is the precursor for opiates. 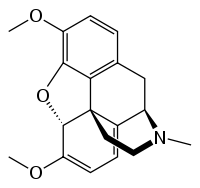 Due to the incredible strides that have been made in regards to genetic engineering, a team of researchers headed by Christina Smolke from Stanford University in Palo Alto California has successfully incorporated genes derived from a variety of plants including poppies, bacterial genes from Pseudomonas and rodent genes into the yeast genome and endowed these modified yeast organisms with the capacity to produce thebaine from a sugar source.  This methodology required the successful incorporation of 21 different genes – a monumental enterprise.

This is a significant breakthrough in the area of synthetic biology for it suggests that eventually it will become possible to readily produce large quantities of thebaine that can subsequently be used to produce a variety of opiates.  Smolke and her colleagues avoided producing a modified yeast cell capable of producing morphine directly from sugar in order to forestall the possibility of inadvertently making the illicit production of morphine a practical reality.
Posted by Joseph Aprile at 7:39 AM