There are a host of diseases that are a direct result of a mutation in a single gene. Examples of this kind of disease are many including sickle cell anemia, severe combined immunodeficiency disease (SCID) and many others. The world famous chemist, Linus Pauling (1901-1994) coined the term Molecular Disease to refer to this type of illness. He was awarded the Nobel Prize in Chemistry for his work in 1954.

We shall use sickle cell anemia as a case in point to illustrate how a singular change in the molecular structure of a gene can have profound consequences for the organism. A patient with sickle cell anemia presents the following symptoms often beginning at 4 months old:

This disease was thought to have a genetic etiology based upon the epidemiological data which showed its prevalence among individuals of African descent (one in twelve African Americans are heterozygous for this trait). Furthermore, these data also pointed to a recessive trait i.e. both alleles have to possess the altered gene for the symptoms to appear. 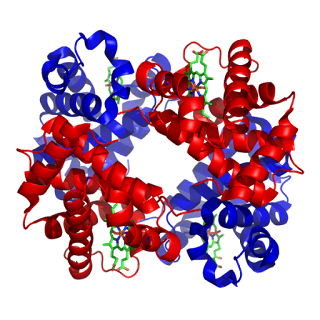 Hemoglobin is the protein found in circulating red blood cells (RBC) that is responsible for transporting oxygen through the blood stream and ultimately to all the tissues of the body. This change in the structure of hemoglobin is a direct result of a replacement of one of its constituent amino acids. In this case the sixth amino acid in the protein polypeptide chain has been changed from glutamic acid to valine. This singular modification causes the deoxygenated form of the protein to clump together (See Figure 3). This replacement results in a molecule that is no longer readily soluble in the cell cytoplasm of RBC. As a result of this one change, the overall morphology of RBC is changed from the normal disc shape to crescent shape and they can no longer flow readily through the bloodstream as shown in Figure 1. 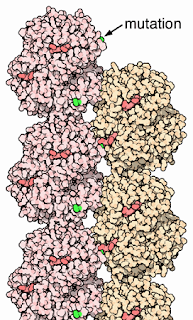 Since the sequence of all proteins is determined by the specific sequence of nucleotides in the genes responsible for their production, sickle cell anemia is a direct result of a single point mutation in the gene carrying the information for the production of hemoglobin found on human chromosome number 16 – hence the term, molecular disease.

In the past, this type of illness has been impervious to the possibility of a cure, since its origin resides in the very makeup of an individual’s heredity as expressed through the genes. However, since, red blood cells originate in the bone marrow, sickle cell anemia can be cured by bone marrow transplantation, but this approach has its own set of significant risks.

Recent advances in molecular biology and gene therapy have demonstrated that this daunting limitation can be effectively breached using gene therapy. SCID is a particularly devastating and ultimately fatal disease in which the affected child has no defense against infections. Through the ground breaking work of Dr. Alessandro Aiuti, ten patients suffering from SCID are still alive. The mutated gene in this condition is the ADA gene responsible for the production of the enzyme adenosine deaminase - ADA. The laboratory of Dr. Aiuti from the San Raffaele Institute for Gene Therapy in Milan successfully used the following procedure: bone marrow cells from the patients involved were incubated with a specially engineered virus containing the normal ADA gene. These engineered cells were reintroduced into the patients. Positive results were seen almost immediately following treatment. A similar approach has been used in the treatment of a disease characterized by a congenital degeneration of the retina. In this study four of six patients had a notable improvement of vision.

The latest advance has been made with Adrenoleukodystophy (ALD), a disease linked to the X chromosome. This is a severe neurodegenerative disease that leads to destruction of myelin, the outer membrane of nerve cells, in the brain and severe nervous system dysfunction. This disease is caused by a mutation in the ABCD1 gene. The first successful clinical test using gene therapy for ALD has recently been reported by Dr. Nathalie Cartier and her colleagues from the University of Paris-Descartes in Paris, France. The approach used was to take hematopoietic stem cells (HCS) from two young male patients and incubate their cells with a virus that was engineered to carry the normal ABCD1 gene. These modified cells were then reintroduced to the patients. Eventually, blood cells with the normal gene were found distributed throughout each patient’s body. Within 14 to 16 months post treatment, cerebral demyelination was arrested and neurological and cognitive functions remained stable. The patients’ own cells were used in this procedure; this avoids any need for a donor and obviates any concern of possible rejection. This is an extraordinary result and has profound implications for the future of gene therapy in medicine and may eventually find application in the treatment of sickle cell anemia.
Posted by Joseph Aprile at 9:37 AM