Myelodysplastic syndromes (MDS) represent a disease state that has its origin in the bone marrow.  Within the bone marrow are resident stem cells that are the progenitors of the circulating white and red cells and platelets that play vital roles in immune function (white cells), oxygenation of the tissues (red cells) and the ability of blood to clot as the result of trauma (platelets) - see diagram below.  The wide range of types of human leukemia are cancers of these progenitor stem cells. 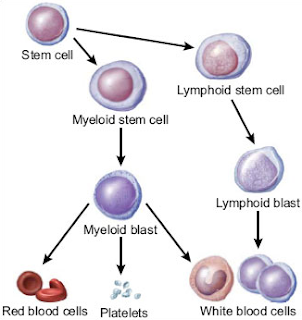 In the case of MDS, these stems fail to mature and produce cells that are referred to as blasts and so-called dysplastic cells.  As a result, the number of mature stem cells are diminished in number; a state that results in diminished numbers of circulating white (neutropenia) and red cells (anemia) and platelets (thrombocytopenia).  It is this diminished cell count that produces the symptoms associated with MDS.  These symptoms may include –
·         Fatigue
·         Weakness
·         Easy bruising or bleeding
·         Fever
·         Bone pain
·         Shortness of breath
·         Frequent infections.

There are also cases in which the overall cell counts appear normal, but the circulating cells are abnormal.  Chromosomal abnormalities have also been found associated with MDS.  What makes MDS particularly significant from a human health perspective, is that certain subtypes of MDS have been shown to be a precursor to acute myeloid leukemia (AML) – a particularly aggressive form of leukemia

From the perspective of scientific research, the question that remains to be answered is what are the cause(s) of MDS.  This question has been and continues to be the focus of a concerted and intense collaborative effort.
Posted by Joseph Aprile at 1:26 PM