Natural Killer Cells in the Treatment of Cancer

It has been well established that the human immune system has the inherent capability to recognize and eliminate aberrant tissue cells in the body that have become transformed into cancerous cells capable of metastasis.  The natural process of finding and eliminating these cells is referred to as cancer surveillance.  It is this understanding that has led to the development of clinical approaches taking advantage of this phenomenon.  The techniques employed in this regard are classified under the heading, cancer immunotherapy.

There is a particular subset of circulating immuno-competent white blood cells referred to as natural killer cells that play a significant role in the body’s response to infectious pathogens as well as in cancer surveillance (see image below).  Dr. Rizwan Rowee and is colleagues from the Department of Medicine, Oncology Division Washington University School of Medicine in St. Louis investigated the properties of natural killer cells in regard to their ability to identify and destroy cancerous cells.  They were particularly interested in their “memory” capacity.  It has long been known that subsets of immuno-competent cells retain the capacity to recognize and attack particular targets from previous encounters.  This is an indispensable feature of a normal immune system. 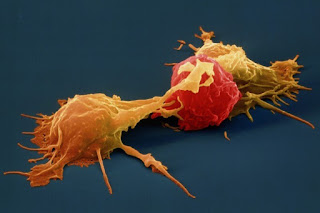 These are very important findings especially in regard to the treatment of patients with AML; since, this disease is a particularly aggressive form of leukemia.
Posted by Joseph Aprile at 7:47 AM