Alzheimer’s disease impacts many individuals in the latter stages of life.  It is a form of dementia that is very devastating to the individuals affected and their families.  On the molecular level, the disease is indicated by extracellular protein “plaques” that are composed of amyloid-β (Aβ) and an accumulation of so-called, “neurofibrillary tangles” within the neurons (see images below).  These tangles are composed of tau protein.  Amyloids represent aggregates of proteins that are stuck together and pose problems for cellular health and development in tissues.  This is especially important within the central nervous system since communication between neurons is of such vital importance. 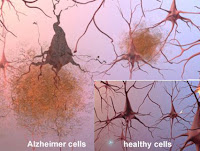 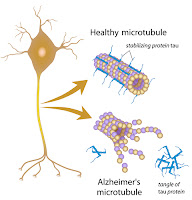 The accumulated evidence suggests that it is the combined impact of Aβ and tau that lead to the neuronal dysfunction that is indicated by the severe cognitive deficits exhibited by individual with this disease.  Furthermore, the production of Aβ seems to trigger the subsequent phosphorylation of tau protein that lead to its deposition and ultimately to cognitive deficits.  In mouse animal models, the depletion of tau prevents Aβ toxicity.  It seems that by the time the symptoms are evident, significant cell damage has already occurred.

However, recent studies by Dr. Arne Ittner and his colleagues from the School of Medical Sciences at UNSW Australia have shown that site-specific phosphorylation of tau directed by the neuronal p38 mitogen-activated protein kinase enzyme (p38γ) actually inhibited Aβ toxicity.  Furthermore, the depletion of p38γ worsened cognitive defects and increasing p38γ eliminated these deficits.


These results are of importance; for, they demonstrate that phosphorylation of tau may or may not be detrimental depending upon the site(s) on the protein structure that are impacted.
Posted by Joseph Aprile at 8:32 AM