An Elegant and Monumental Experiment

The year is 1952 – two years prior to the discovery of the three-dimensional structure of DNA.  At that time there were essentially two schools of thought regarding the class of organic compounds responsible for heredity, namely, proteins or nucleic acids.  Two researchers Alfred Hershey (1908 – 1997) and his assistant Martha Chase (1923 – 2003) collaborated on a research project that they felt could unambiguously provide the answer to this fundamental question.  The experiment described below is remarkably simple, precise and elegant; the ramifications of their results speaks for itself in regards to the discoveries that would follow including Watson and Crick’s elucidation of the structure DNA and ultimately the complete sequence of the human genome (2003).

Hershey and Chase focused their attention upon the bacteriophage – a type of virus that preferentially attacks bacterial cells.  Like all viruses, the phage is made up of two distinct classes of compounds – a protein coat that surrounds a DNA core (there is also a class of viruses that use RNA as the infecting agent, the AIDS virus, for example). 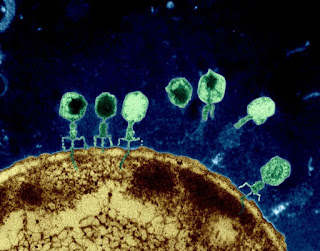 The results from these experiments, clearly demonstrated that the infectious agent was DNA and not protein.  This conclusion was so significant at the time that James Watson stated that, “the Hershey-Chase experiment had a much broader impact than most confirmatory announcements and made me ever more certain that finding the three-dimensional structure of DNA was biology's next important objective.”

Note, that Hershey won the Nobel Prize for his work in 1969 along with Max Delbruck and Salvador Luria.  This kind of experimental approach also demonstrates the roles that imagination, dedication, persistence and creativity play in conducting scientific research.

Posted by Joseph Aprile at 1:10 PM