Resistance to the anti-malarial drug Artemisinin in Malaria Parasites 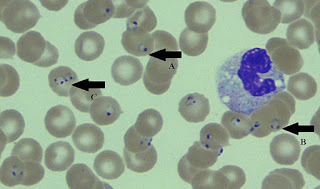 Resistance of the anti-malarial drug Artemisinin in Malaria ParasitesMalaria continues to be a scourge in many parts of the world. The problem is particularly acute in Africa. Malaria is a pervasive illness characterized by high fevers, shaking chills, flu-like symptoms, and anemia. It is caused by a parasite referred to as Plasmodium falciparum. Plasmodium is carried by the Anopheles mosquito prevalent in the tropics.

The drug, Artemisinin (ART) has proven to be an effective drug against the malarial parasite – plasmodium falciparum. However, the parasite has apparently developed an immunity to this efficacious drug. It is, therefore, imperative that the mechanism of this resistance be more fully understood if an effective remedy is to be found. The collaborative efforts from research investigators at the Bernhard Nocht Institute of Tropical Medicine in Hamburg, Germany and the Department of Molecular Biology at Radbound University in the Netherlands have helped elucidate this mechanism.

The life-threatening aspect of infection by the Plasmodium falciparum parasite is the capacity of this parasite to continuously multiply within human red blood cells. Residing within human red blood cells, these parasites actively breakdown hemoglobin thereby obviating its capacity to deliver oxygen to the body’s tissues. Artemisinin has been long regarded as a first-line drug. However, ART resistance has manifested itself as a decreased susceptibility of young ring-stage parasites to a short pulse of this drug.

ART resistance has been shown to be associated with point mutations in the parasite’s so-called, Kelch propeller protein (Kelch13). However, the precise mechanism of this resistance to ART was essentially unknown. Although cellular stress, reduced protein translation and altered DNA replication had been implicated, the role of Kelch13 within the parasitic cell remained enigmatic. Here, the authors report an entire pathway in ART resistance and the Kelch13-dependent mechanism that effectively describes the reduced susceptibility to ART in resistant parasites.

The investigators in this extensive study, “show that Kelch13 defines an endocytosis pathway required for the uptake of host cell hemoglobin and its subsequent breakdown and that this pathway is critical for ART resistance. Their data indicate that Kelch13 and its compartment proteins mediate resistance upstream of both, drug activation and action. They have proposed a model where Kelch13 and its compartment proteins control endocytosis levels, thereby influencing the amount of hemoglobin available for degradation and hence the concentration of active drug.”

As a result of these findings that help elucidate the mechanism of ART resistance in malarial parasites, the authors conclude that, “We envisage that the mechanism of ART resistance indicated by this work will aid in finding ways to antagonize it. It may also inform the choice of ART partner drugs, particularly as hemoglobin digestive processes are the target of existing drugs.”
Posted by Joseph Aprile at 11:32 AM