Disturbing new evidence is emerging from the post-mortems of patients who have died from COVID-19 disease that demonstrates the presence of blood clots (thrombi). These thrombi have been shown in this extensive study to be present in major organs and systems including the lungs, heart, kidney, and brain.
In addition, a particular cell type referred to as a megakaryocyte has also been found associated with these thrombi. Platelets (thrombocytes) are often associated with thrombi. Platelets, themselves, are generated from so-called progenitor, promegakaryocytes that reside and multiply within the bone marrow. Megakaryocytes are formed from promegakaryocytes and from these megakaryocytes are formed that ultimately break up to produce platelets (see diagram below) that are released into the blood and tissues. The fact that megakaryocytes are evidenced in higher than usual numbers in tissues such as lung, heart, kidney, and brain in patients with COVID-19 disease is a cause for concern. 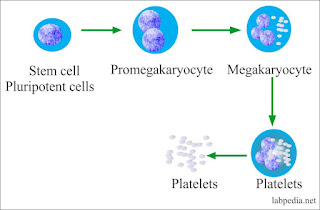 According to an abstract published by Lancet – a prestigious medical publication – and authored by Amy V. Rapkiewicz, “In seven patients (four female), regardless of anticoagulation status, all autopsies demonstrated platelet-rich thrombi in the pulmonary, hepatic, renal, and cardiac microvasculature. Megakaryocytes were seen in higher than usual numbers in the lungs and heart. Two cases had thrombi in the large pulmonary arteries, where casts conformed to the anatomic location. Thrombi in the IVC were not found, but the deep leg veins were not dissected. Two cases had cardiac venous thrombosis with one case exhibiting septal myocardial infarction associated with intramyocardial venous thrombosis, without atherosclerosis.” In addition, The presence of circulating megakaryocytes on autopsy in various organs was also found and thoroughly studied.

The fact that thrombi have been found in the post-mortems of a significant number of patients who died of COVID-19 disease can account for systemic organ failure in vital organs such as lung, kidneys and heart and such a set of conditions could easily lead to subsequent death.

These data are exceedingly troubling and leaves researchers with a profound question – how does COVID-19 infection trigger such a disastrous response?
Posted by Joseph Aprile at 8:25 PM