The Basis of Antiviral Immunity 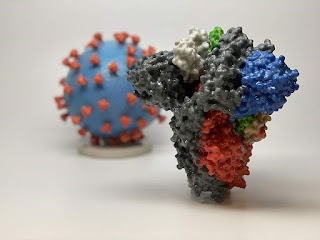 Models of COVID-19 and the Spike Protein

The human immune system is a highly sophisticated and powerful system that the body utilizes on an ongoing basis in order to ensure the continued survival of the individual in a hostile environment. It is comprised of a heterogeneous population of cells, factors and organs that function together to maintain the general health of the individual. The immune system is, in fact, a product of millions of years of evolution. Rudimentary immune systems and processes can be found in many more primitive forms of life including single-celled organisms.

Both T-cells and B cells represent the primary cellular arsenal for the adaptive immune system essential for the eradication of invading viruses. The progenitors of the cellular components of the human immune system originate in the bone marrow. The COVID-19 pandemic has revealed the wide variability of the immune response to the COVID-19 virus ranging from an asymptomatic response to an acute and sometimes life threatening severe acute respiratory syndrome. This apparent variability has raised questions regarding the mechanisms through which antiviral responses are employed and the nature of the longevity of immunological memory.

As we are well aware, viral infections often lead to disease states within the impacted host. Viruses occupy a special place in regard to life on planet earth. They are essentially inert when outside a living cell showing no properties that are ordinarily assigned to living things. However, once they gain entry into a host cell, they subvert the cellular machinery, effectively diverting ordinary cell processes to a singular goal – the production of viral particles. This usually leads to the death of the host cell facilitating the release of new viral particles that go ahead and infect neighboring cells within the target tissue – in the case of COVID-19 its target tissue is found in the lungs.

The dynamics of the human body’s response to an invasion by a virus is intricate, immediate, and multi-faceted. The current understanding of this process is that it involves the integration of the two arms of the immune system we have previously referred to i.e. the innate and the adaptive. The first and rapid response is that of the innate system. The innate immune responses result in the production of factors that lead to inflammation at the site of entry – this is the so-called “inflammatory response.” This response leads to the activation of the adaptive immune system.

Viral particles are essentially composed of an inner core of either DNA or RNA and an outer shell of protein. It is the proteins on the viral surface that are potential antigens. Viral proteins and particles are subsequently taken up by specialized cells in the immune repertoire that are called dendritic cells (DCs) These cells transport the ingested antigen(s) to the lymphoid organs (lymph nodes and spleen for example), where they are specifically recognized by T and B cells. The T cells constitute the cellular branch of the adaptive system and the B cells represent the humoral branch responsible for the production of specific antibodies against the viral intruder. It is the cellular (T cell) and humoral (B cell) branches of adaptive immunity that collaborate to enable highly specific defenses against diverse viruses.

According to Dr. Linda Bradley from the Tumor and Microenvironment and Cancer Immunology Program at Sanford Burnham Prebys Medical Discovery Institute at La Jolla in a recent report in the prestigious journal, Science, “The magnitudes of the T and B cell responses are determined by such factors as the pathogenicity of the virus, the extent of inflammation, the frequencies of virus-specific T and B cells, and the kinetics of viral replication. CD8+ T cells differentiate into effector cells that limit viral replication through production of cytokines and direct killing of infected cells."

Furthermore, in regard to immune responses to COVID-19, this report goes on to state that, “Viral recognition elicits cytokine-producing effector cells, such as T helper 1 (TH1) cells, which inhibit viral replication and support CD8+ T cell as well as B cell differentiation. Effector T cells can enter the circulation and relocate to tissue sites of infection, where they mediate local antiviral responses. CD4+ T cells also differentiate into T follicular helper (TFH) cells that are crucial for the development of antibody-producing B cells (plasma cells) in lymphoid tissues and support memory B cell development. Antibodies can neutralize viruses by preventing host cell entry or promoting the lysis of infected cells. As a result of the coordinated interplay of innate and adaptive responses, the peak T and B cell responses lead to decreasing viral load and subsiding inflammation, often within 1 week of infection."

It is an understanding of the mode of action of a particular virus and the immune system’s responses to it, as outlined above, that plays a critical role in developing a vaccine that can effectively augment the natural immunity. For a virus to successfully infect a host it must gain entry to the host, successfully evade the immune response, gain entry into the host cell, and successfully commandeer the host cells machinery to make more viral particle and spread the infection. Any vaccine that successfully interdicts any of these mechanisms will necessarily prove efficacious.
Posted by Joseph Aprile at 4:42 PM