What is the A1C Test?

The disease diabetes mellitus occurs in two different forms – juvenile or adult-onset.  In either case, the source of the illness is lack of or reduced production of the hormone insulin (see image below) whose role is to enhance the uptake of glucose circulating in the blood by tissue cells, especially adipose and skeletal muscle.  Insulin (as seen below) is referred to as a globular protein 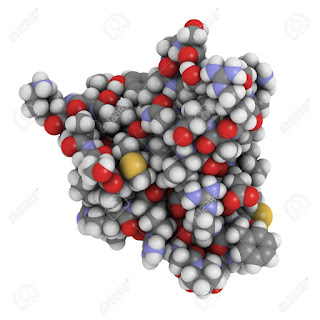 Insulin is normally produced by specialized beta cells resident in the Islets of Langerhans within the pancreas.  It has been established that juvenile diabetes is an auto-immune disease in which the immune system of the patient attacks these beta cells.  Adult-onset diabetes, on the other hand, has a strong association with obesity.

This inability to transfer glucose to tissue cells where it is utilized for energy, leads to high concentrations of glucose in the blood (hyperglycemia).  Over a prolonged period of time, this hyperglycemic state results in very serious and ultimately life-threatening complications including blindness, impaired kidney function, cardiovascular issues leading to heart trouble and leaving victims prone to amputation.  These deleterious side effects arise as the excess glucose in the blood reacts with proteins in various tissues throughout the body – this biochemical reaction is referred to as glycosylation.

Once the cause of diabetes was discovered, it was realized that an obvious therapeutic approach is to give the patient insulin from an external source.  Before the advent of DNA recombinant technology, patients were given insulin harvested from cow pancreas (bovine insulin).  Bovine and human insulin are close enough in structure to allow bovine insulin to have an efficacious effect.  Currently, of course, human insulin is readily available.

Over many years of treating diabetic patients with human insulin, it was realized that periodic administration of insulin is not comparable to the body’s finely tuned regulation of insulin production so as to maintain optimal levels of blood glucose.  In response to this deficit, a technology arose to employ the use of an insulin pump in order to maintain a steady stream of insulin along with careful monitoring of blood glucose levels.  In addition, considerable emphasis has been placed on nutrition, exercise and weight control especially in regard to adult-onset diabetes.

Another important tool in the treatment of diabetes is the so-called A1C test.  This test provides information as to the average level of blood glucose over a 3-month time span; it is also referred to as the glycohemoglobin test.  This test measures the amount of glycosylated hemoglobin.  Hemoglobin is the specialized protein in red blood cells that is designed to carry oxygen to the tissues.  This protein reacts with excess glucose in the blood.  Since red blood cells are recycled by the body over a 3-month period, the test provides information about the average level of glucose in the blood over this period of time.  The result of this test is reported as a percentage.  The normal value is about 5.7%.  The higher the percentage, the higher the blood glucose level has been over the past 3 months.

The A1C test is an important tool in determining the efficacy of treatment for diabetic patients.
Posted by Joseph Aprile at 8:00 PM