Opioids are a class of compounds that relieve pain by binding to opioid receptors found on neurons that send signals to the brain that the brain interprets as pain; this binding results in a significant reduction in these signals.  In addition, opioids also bind to analogous receptors within the brain that reduces the emotional response to painful stimuli.
According to the National Institute of Drug Abuse, “Medications that fall within this class (opioids) include hydrocodone (e.g., Vicodin), oxycodone (e.g., OxyContin, Percocet), morphine (e.g., Kadian, Avinza), codeine, and related drugs. Hydrocodone products are the most commonly prescribed for a variety of painful conditions, including dental and injury-related pain. Morphine is often used before and after surgical procedures to alleviate severe pain. Codeine, on the other hand, is often prescribed for mild pain. In addition to their pain-relieving properties, some of these drugs—codeine and diphenoxylate (Lomotil) for example—can be used to relieve coughs and severe diarrhea.”

These receptors pre-exist in nature for they bind to certain endogenous opioids such as dynorphins, enkephalins and endorphins.  The structures of morphine and an endorphin are shown below 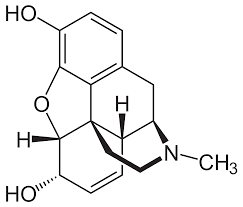 Opioids are readily found in nature and, as such, have been used to relieve for thousands of years within human populations.  Biochemically, opioids receptors (see illustration below) that are imbedded in the outer cell membranes of target cells are G-protein coupled, and activate inhibitory G-proteins. Once bound to the appropriate receptor, they trigger a series of cascading chemical events within the cell resulting in the suppression of neuronal signaling. 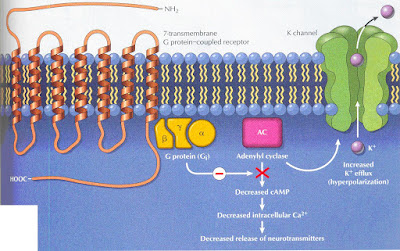 Although opioids play a very important role in modern medicine for the relief of acute pain, there is an alarming rise of abuse of these substances especially since they are highly addictive.  Of special concern is the increased street-use of a very potent opioid – fentanyl (see structure below) 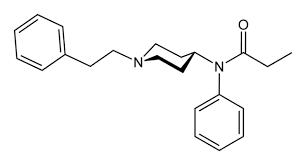 Fentanyl
Fentanyl is, often used in anesthesia to prevent pain after surgery or other procedures.  According to DEA administrator Miechele M. Leonhard "Drug incidents and overdoses related to fentanyl are occurring at an alarming rate throughout the United States and represent a significant threat to public health and safety."

"Often laced in heroin, fentanyl and fentanyl analogues produced in illicit, clandestine labs are up to 100 times more powerful than morphine and 30 to 50 times more powerful than heroin," she added.  In addition, the DEA has noted that, “ingestion of even small doses ― as small as 0.25 mg ― can be fatal. Its euphoric effects are indistinguishable from those of morphine or heroin.”

Of additional concern is the fact that fentanyl can be absorbed directly through the skin, or unknowingly inhaled as an airborne powder; this is especially of critical importance for law enforcement personnel.  Another cause for concern is that fentanyl - like other compounds in the opioid class - can be readily synthesized. In an appropriately equipped laboratory.

The abuse of opioid substances, especially fentanyl is a very real, immediate and important public health issue and deserves the attention of not only government agencies but concerned citizens.  Rather than focusing on criminal punishment of offenders, greater emphasis and resources should be brought to bear on drug rehabilitation and education as a way to help prevent such abuse from happening in the first place.
Posted by Joseph Aprile at 1:49 PM