The Molecular Biology of Celiac Disease

Celiac disease is a so-called, “autoimmune disease” that impacts an estimated one percent of the population.  An auto-immune disease is caused by an individual’s immune system attacking its own tissue.  Other examples of diseases that fit this classification are multiple sclerosis (MS), pemphigus, rheumatoid arthritis and systemic lupus.

In Celiac disease, the tissue that is impacted involves the microscopic villi that line the lumen of the small intestine.  These structures provide the surface area through which digested nutrients are absorbed (see image below).  The patient with celiac disease presents with unexplained loss of weight and fatigue, anemia and constipation for example.  The destruction of these highly complex structures is irreversible; if, this condition is left untreated, it can be deadly. 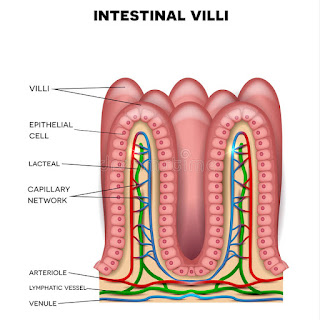 The trigger for this auto-immune response is the presence of gluten - a protein found in wheat and related plants.  Gluten is a protein that is prevalent in Western diets.  In addition, research studies have demonstrated that the agent (antigen) that induces the autoimmune response is not the intact gluten protein but the protein after it is modified by the enzyme transglutaminase 2 (TG2) within the small intestine.  It seems that in normal tissues, although TR2 is an abundant enzyme, it exists primarily in the inactive state.
Chaitan Khosla and his colleagues at the University of California at Stafford have recently demonstrated that there is a cellular enzyme protein 57 (ERp57) that inactivates TG2.  Normally, ERp57 is involved in the process of protein folding within the cell.  Furthermore, it has been established that ERp57 inactivates TG2 outside the cell within the extra-cellular environment.  These data suggest that the etiology of celiac disease may relate to the functionality of ERp57.

These findings are significant; for, a more detailed understanding of the biological chemistry of celiac disease may open avenues of therapy that have heretofore remained elusive.