Stem Cells and the Risk of Atherosclerotic Cardiovascular Disease

Atherosclerosis is a condition often associated with age that involves a narrowing of the lumen of the arteries usually associated with age (see image below).  This condition often leads to coronary heart disease.  Traditionally there are a number of risk factors that are generally associated with this syndrome – high blood pressure (hypertension), high cholesterol, heredity, life style, diet etc.  However, a significant percentage of those individuals that show evidence of atherosclerosis have no known risk factors.  Research done by Dr. Siddhartha Jaiswal and his colleagues that has been published in the New England Journal of Medicine (July, 2017) sheds significant light on the possible etiology of this perplexing reality. 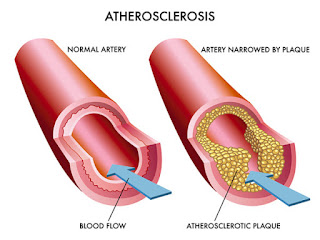 Within the bone marrow, reside stem cells that are so-called, pluripotent cells; they are responsible for the production of the body’s complement of immune-competent cells such as red blood cells, white blood cells including lymphocytes, neutrophils etc.  It has been well documented that over the lifetime of the individual these stem cell undergo mutations that can lead to blood – hematopoietic – cancers such as leukemia.
According to Jaiswal, “Clonal hematopoiesis of indeterminate potential (CHIP), which is defined as the presence of an expanded somatic blood-cell clone in persons without other hematologic abnormalities, is common among older persons and is associated with an increased risk of hematologic cancer.”

Jaiswal and his associates now have evidence that CHIP may be the underlying cause of atherosclerotic cardiovascular disease of no known etiology.  The results of their studies indicate that the presence of CHIP in the cell population of circulating blood was associated with a near doubling of the incidence of atherosclerotic cardiovascular disease.  Furthermore, the common mutations that were present in CHIP were found to be in the genes DNMT3A, TET2 AND ASXL1.  These genetic mutations have also been shown to be associated myelodysplastic syndrome (MDS) and acute myeloid leukemia (AML).   These clones seem to be more prevalent with age – more that 10% of persons older than 70 years carry such a mutation.

This finding is significant in that it shed further light upon the etiology of atherosclerosis.

Posted by Joseph Aprile at 8:41 AM