This fall the general population has been plagued by an increased incidence of illnesses caused by three distinct viruses - COVID 19 (Coronavirus), Respiratory Syncytial Virus (RSV) and the Influenza Virus.
Infants and the elderly can be particularly impacted by severe illness with RSV. RSV is a negative-strand RNA virus. The term syncytial comes from the fact that host cells infected by the virus fuse and form large cells, syncytia. Although RSV infection is quite common and the respiratory issues it produces are usually not severe and of short durations, for infants and the elderly, it can produce severe and dangerous symptoms that may include difficulty breathing, abnormal respiratory sounds and coughing and wheezing that does not stop. 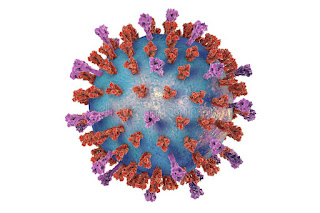 This fall, hospitalization of infants and the elderly with RSV has been particularly devastating. This reality has accelerated the development of a safe and effective vaccine against this virus. It has recently be reported in the prestigious journal, Science that two large trials have proven the efficacy of two vaccines against RSV infection. The data demonstrate that either vaccine can protect both infants and individuals over the age of 60. One of these vaccines also was found to protect infants for up to six months when given to women in the latter stage of pregnancy who could pass the antibodies induced by the vaccine to the fetus.
Some fifty years ago an initial attempt to develop a vaccine against RSV proved unsuccessful; a chemically inactivated intact virus was used in this particular vaccine. Not only did the vaccine fail to elicit a robust response to RSV infection, it also led to some fatalities and even worsened the symptoms of those treated from subsequent RSV infection.

It was reported that, “The new vaccines avoid this problem by relying on a key advance made by Barney Graham and co-workers at the National Institute of Allergy and Infectious Diseases in 2013”

They discovered that a key viral protein located on the surface of the viral membrane interacts with a particular receptor on the cell membrane of the target tissue and changes its shape allowing it to gain entry into the host cell. The team working on vaccine development led by Doctor Graham currently at the Morehouse School of Medicine (Atlanta, Georgia) used this knowledge to modify the viral protein so it remains fixed in this modified state. Once this modified antigen was introduced into the vaccine, it resulted in the production of higher levels of effective antibodies. This good news was established as a result of clinical trials run by GSK and Pfizer. This result illustrates how the knowledge gained from the study of viral biology can prove efficacious in the development of treatments against infection.
Posted by Joseph Aprile at 8:21 AM