An approach to Cancer Treatment Combining Immunotherapy and Chemotherapy


Immunotherapy is an approach that focuses on and improving the body’s inherent capacity to attack tissue cells that have been transformed into cancerous cells. However, the current drawback of this approach is its inability to effectively distinguish the target cell from neighboring healthy cells. This is especially true for cancers that are derived from oncogene expression. Chemotherapy that has long been the mainstay of cancer treatment has a serious limitation of its own – actively growing cancer cells often develop a resistance to this kind of drug treatment.
Takmitsu Hattori and his colleagues at the Laura and Issac Perlmutter Cancer Center at New York University have attempted to overcome this impasse by developing a methodology that combines these two methodologies. Their approach is to effectively create a neoantigen, a hapten-peptide conjugate, which can preferentially combine with cancer cells and serve as a target for selective elimination.

These research scientists treated lung cancer with sotorasib – a drug that specifically targets KRAS – an oncogene that is involved in cell signaling pathways that are in involved in the control of cellular proliferation, cell development and cell death. Subsequently, they administered synthetically created antibodies designed to recognize the neoantigens that were the product of KRAS generated protein that had been bound to sotorasib. These administered antibodies were shown to have selectively killed even the sotorasib-resistant cells while leaving normal cells intact. 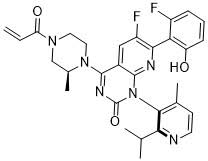 Sturcture of Sotorasib
These results show a great deal of promise in regard to adding to the repertoire of cancer treatment modalities.
Posted by Joseph Aprile at 9:14 AM